More and more headlines today have to do with the war between faith and science. To have one, we are led to believe, is to be hostile to the other.  Comments by some scientists and televangelists reinforce this notion that this is an 'either/or' kind of battle and that the other side (whichever it is) is to be treated with skepticism and hostility.

As with most 'either/or'  scenarios. this is a case of a forced, false dichotomy. We don't need to choose faith over science or vice versa. There are plenty of respected scientists that have a deep and profound faith in God and there are plenty of theologians and ministers that have a great respect and appreciation for science. Since most of what gets published as 'news' today is by definition sensational, these viewpoints are rarely acknowledged which leaves most with the impression that there is a great war going on. 'Wars' and debates always make better headlines than discussions.

About a year ago I  listed a couple books that I have found to be very helpful in the discussion between faith and science. They are The Language of God and God's Universe and I have included them again in the booklist on the left, 'Books Worth Reading'.   If you'd like to go beyond the headlines and the religious rantings that seem to dominate the airways, these books are a great place to start.

The Cupola Has Arrived 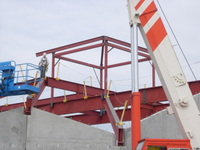 The cupola has been set!

For more (including more pictures) click on the following link: Expanding Hope Blog

Last summer we did a series on the Seven Deadly Sins, based on a list of sins that has been around for about a thousand years.  I recently saw an article (National Ledger, March 13, 2008) that lists the NEW Seven Deadly Sins. In light of the Pope's recent visit , I thought this might be appropriate.

ABC News reports that in the newspaper interview, the number two  official suggested the old seven deadly sins were largely individualistic: lust, wrath, gluttony, sloth, greed, pride, and envy. But in the modern world, modern sins have a much bigger social impact.

The seven new deadly sins were published in an issue of the L'Osservatore Romano, the  Vatican's official newspaper. Monsignor Girotti named the new mortal sins to be:

The point of the article seems not to be establishing new church doctrine, but launching a new conversation about what it means to be faithful to God in today's modern and inter-connected world.

I don't think this is going to replace the classic list, but it certainly is food for thought.

The call went out and people answered.

We moved the offices on Monday and we couldn't have done it without the 12-15 people who came by and made it happen. Because of them, we not only moved the 'big' furniture (desks, tables, file cabinets), but we also were able to move many of the supplies and clear the main offices.  Thank you!

Thanks too, to Session for providing lunch for everyone. It came at just the right time.

With a little luck we will be pretty much 'up and running' by Wednesday. We may even have a bulletin on Sunday!

Well, today is moving day.  Last week my office was out of commission. This week, the rest of the offices get moved.
Administration offices will be moved to what is currently Fellowship Hall #3 (the fact that this has been the Pre-School room will likely be the source of more than a few jokes).  The rest of us will find places to work throughout the week in classrooms or other spaces while at church.  It should be interesting.
In case you call this week and don't get a 'live' voice, it may be because we are still setting up our phones. We'll respond to voice mail messages and of course, emails.

The quote by Rob Bell last week reminded me of another observation by one of my favorite authors, Frederich Buechner.  In his book, Wishful Thinking: A Theological ABC he muses about the word 'Theology'

Theology is the study of God and his ways.  For all we know, dung beetles may study man and his ways and call it humanology.  If so, we would probably be more touched and amused than irritated. One hopes that God feels likewise.

The next time you drop by my office, you might notice something is missing:  Me!

The time has come when my office will no longer be habitable. In fact, soon it won't even exist!  The same will be true of all of our offices in a week or two. If they won't be demolished, they will be remodeled and be 'off limits' for about five months.

To answer the most frequently asked questions: 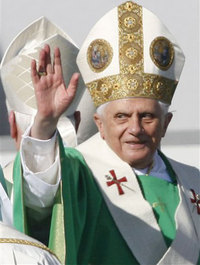 The news this past week has been full with the visit from Pope Benedict XVI- and that's a good thing.  As the leader of the largest part of the Christian family (something like 1 billion people are part of the Catholic Church), he commands large crowds and lots of media attention. He uses these visits, homilies and speeches to raise up issues of faith and practice. He calls for peace, compassion and faithfulness, and those are values that are shared by all followers of Jesus Christ.

The word "Pope" is translated as 'Father' or "Papa". While he is not recognized with the same authority or position in our Protestant churches, he is still part of the family. Think of him as an uncle. His devotion, faithfulness and dedication to the cause of Christ are to be commended and set an example for all.

First-Look Sunday: It's a Go!*

In case you have been looking out the window and wondering if all this snow is going to get in the way of our First-Look Sunday for another week, you can relax: The concrete was poured on Monday.

Wet or snowy weather shouldn't be a problem.*  Besides, it looks like we are going to have some great weather this weekend.* What could go wrong?*

Seriously, it looks we will have a great weekend ahead of us for our First-Look Sunday.* See below for a description of what First-Look Sunday is and how it will work. There will be a small window when we can walk around the inside of the new building before the scaffolding and other equipment makes it 'off-limits' again. Come be a part of this great Sunday and celebrate the God who is bigger than our asterisks.

* if you are wondering about all the asterisks, you might want to check out last Sunday's sermon.

The moment God is figured out with nice, neat lines and definitions, we are no longer dealing with God.

I've been thinking about this quote lately. It seems we spend much of our time trying to make sense of God:

We work hard to understand God. Yet if we succeed, we fail. The moment we have think we have God figured out is the moment we have a God that is too small. If God is small enough to be understood by our minds, then we have simply created a God in the image of our understanding.

Maybe that's why explaining God is not all that important in the Bible. Scripture seems to be more interested in making sure we are awake to the reality of God around us.  The point seems to be less about comprehending God than about being captivated by him.