A number of people have asked about the video Erik closed the service with last Sunday. It's called, "That's My King" and you can see it again by clicking here.  Check it out.

Worship- or do something useful?

Last Sunday I used a quote from one of my favorite authors, Frederick Buechner.  In his book, Wishful Thinking, this is what he says about worship:

Phrases like Worship Service or Service of Worship are really tautologies.  To worship God means to serve him.  Basically there are two ways to do it.  One way is to do things for him that he needs to have done- run errands for him, carry messages for him, fight on his side, feed his lambs, and so on.  The other way is to do things for him that you need to do- sing songs for him, create beautiful things for him, give things up for him, tell him what's on your mind and in your heart, in general rejoice in him and make a fool of yourself for him the way lovers have always made fools of themselves for the one they love.

A Quaker Meeting, a Pontifical High Mass, the Family service at First Presbyterian, a Holy Roller Happening- unless there is an element of joy and foolishness in the proceedings, the time would be better spent doing something useful.

Last week the sermon began with the disciples, Matthew and Simon the Zealot- an unlikely pair. Despite their vast differences and outlook on life, they found common ground in following Jesus.  What they believed about Jesus and his coming kingdom were even larger than their reasons for hating and not trusting one another.  It raised the issue of 'reconciliation', which always hits a nerve.  The issues of forgiveness and reconciliation seem to live just below the surface of many of our lives.  For some it was liberating. Others found it very poignant- even painful.

I was tempted to revisit the subject so I could address it more fully. Instead, I decided to plow ahead with another subject that has been generating a lot of heat these day: Extravagance.

Whether it is executive bonuses, $1400 trash cans, 84" Flat Screen TV's or Humvee vehicles, we find ourselves getting upset at the extravagance around us- especially when it is around US!  What does the Bible have to say about extravagant living?  You might be surprised.

This morning I referenced a book called, Left to Tell: Discovering God Amidst the Rwandan Holocaust. I was given the book this fall and it made a deep impression on me. I am amazed by how big a heart the author has. I am amazed by how big her God is. It is obvious the two go hand in hand.
The book is listed in the column on the left if you'd like to know more.

Daylight Savings starts this weekend. That means moving our clocks up an hour before going to bed on Saturday night. If you are a bit confused by the shifts in Daylight Savings- you are not alone. I got curious and did a little digging. Here is what I found:

The idea of shifting clocks to allow more afternoon/evening daylight in the summer was first conceived by Benjamin Franklin, though it took until 1907 for England to be the first country to actually try it. The United Sates followed suit in 1918, but it was so unpopular that it was repealed by Congress in 1919 (over the veto of President Wilson). After that, it was a local option with various cities, counties and towns adopting it and others not.

During World War II, the country went back to DST (though then it was called, 'War Time'). After the war, it was left again as a local option. If all that sounds like a recipe for confusion it was. Congress set up a 'Committee on Time Uniformity' to study the problem. They found that on one 35-mile stretch of highway between West Virginia and Ohio, travelers, trains and buses would have to change their clocks 7 times!

Even with all that confusion, it wasn't until the mid-60's before Daylight Savings Time became a national policy. There were some adjustments made in the 70's and 80's for energy savings and then in 2005, Congress amended the calendar again to its current state:  Daylight Savings begins the 2nd Sunday of March and lasts until the 1st Sunday of November.

I'm not sure what all that means except:

The focus this month is on our Children's Minstries- and with good reason! The new Children's Ministriy area is completed and Sunday School Classes have begun to meet there. Last week was the first week for our Elementary- aged children to meet in the new space (Pre-schoolers got to come the week before).  Most heard comments were, "I love it!", "This is so big!" and, "I love having the big meeting space in the middle!" 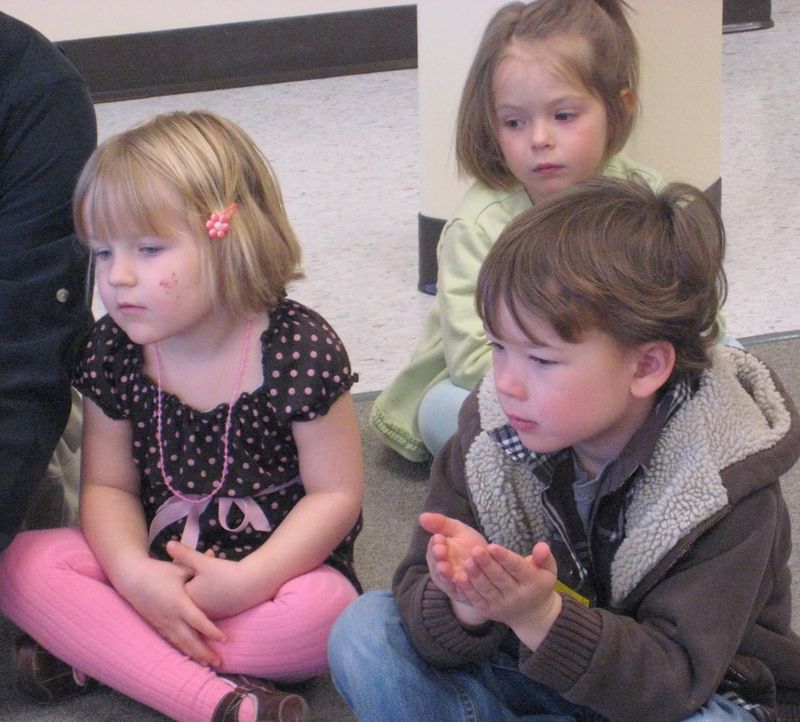 We will present Bibles to our 3rd graders this Sunday (March 8) at the 10:45 service. Childeren who will receive a Bible have completed a Bible orientation class that many of us adults would find helpful! This is such a positive thing (more about that next week).

Pictures like this one and others can be found this month on the walls of our Prayer Walk. As you walk by, note the children, teachers and helpers that make our Children's Ministry such a positive thing for so many families. Use your travel time to thank God for our children and all those who give their time and talents to make New Hope a place that is safe, vital and engaging.

Children and Communion at New Hope

It is one of the most asked questions of parents when they come to New Hope. It is an understandable question.  Many of us come from different backgrounds, with different rules and guidelines. Nobody wants to do something that is inappropriate, but how do you know?  For some of us, the 'rules' have changed just in our lifetime.

When I was growing up, the rule for taking communion in the Presbyterian Church was: only those who were Members of the church should take communion. Usually, that meant the minimum age was about 13-14, the time when young people had the opportunity to join the church. The idea was that no one should take communion without an appreciation and understanding of what it meant.  Made sense to me.

The Baseball box scores are appearing in the paper again, but no one really cares. It is Spring Training. The wins don't count and neither do the losses. Home runs, hits and errors are noted, only to be erased when the 'real' season begins in April. So who cares about Spring Training?  Managers do. They know that even though none of what happens in March counts, it matters.  The seeds of winning seasons are sown in the Spring. Great things come from attention to the small things: the Basics.

As Crash Davis put it in the quirky movie, Bull Durham, "Baseball is simple. You hit the ball. You throw the ball. you catch the ball. Sometimes you win. Sometimes you lose.  Sometimes, it rains."  He may have been a mythical figure in a movie about Minor League baseball, but Crash was right.  Baseball is a game of basics. The team that best pays attention to the basics, usually has the better season.

What does Spring Training have to do with Lent- the season Spring Cleaning of the Soul?  Plenty.