Wow!- Task Force Food Drive Had a 'Ton' of Response! New Hope works closely with the Douglas & Elbert Counties Task Force.  Several times a year we collect food so they can distribute it to those in needs. While we get good response throughout the year, the biggest response always comes around Thanksgiving.

As you can see from the picture, the response this year was tremendous! THe result of all that generosity was 2,123 pounds of food- almost double to what was given last year. Way to go, New Hope! 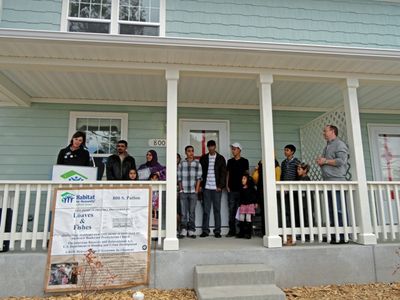 Sometimes the mission of New Hope are 'Homegrown' and sometimes they are part of an already existing effort.  Habitat for Humanity is an example of the latter. New Hope has been involved with the 'Loaves and Fishes' coalition of churches in the area for many years. There are so many things that are 'right' about this organization and it is a source of joy to be a part of it.

Here are some pictures from the dedication of the latest project. This took place at the end of September.  Plans are already being made for the next build, which begins in March, 2012.  If you would like to be a part of this or future projects, watch for more information after the first of the year! A few weeks ago I mentioned Austin Hazelhurst's Eagle Scout Project.  There is so much that is good about this story and how it came to be.  It just got better.

When I highlighted it before, it was Austin announcing the project and getting support.  As you can see by the photos, it has taken another big step.

Wow! Making a Difference in the Neighborhood

I mentioned this project in the sermon on Sunday and wrote about it a couple weeks ago.  At that point, I talked about the 'Old Guys', but that isn't accurate anymore (some of the guys involved informed that it was never accurate- they weren't that old).  This is one of those projects that starts with a couple people and then it starts to expand.  Like a chain reaction, more and more people get involved. I think there are more than 15 people from New Hope who have been involved so far. As of late last week, two groups from other churches got involved, too.  The list is still growing.

Some background:  A family in the community needed a lot of help with their house. The father has cancer and was transferred to Seattle. There was a lot of "deferred maintenance" that needed to be done- and no way to do it. That is where some folks from New Hope stepped in. Much has been done- and there is still much to do (contact Mike Massine if you can lend a hand:  mmassine@newhopepres.org).

It might look like it is 'just' a home improvement project, but it is so much more than that. This is grace in action.  "You were created for good works", Paul writes the church in Ephesus (Eph. 2:10). Its part of the grace of God that is renewing and redeeming the world and renewing and redeeming people at the same time.

Mike put together a video and I embedded it here. I havene't figured out how to re-size it to this space, but don't worry, all you have to do is double-click it and you get a full-screen version. Enjoy!