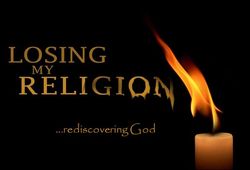 Note:  This is the text of a letter I sent to the New Hope family. It concerns a new sermon series- and so much more.

On September 16th, I am beginning a sermon series that may be the most important subject I have addressed in years- and I want you to be there. The series is titled, Losing My Religion…rediscovering God, and it is in response to a trend that has defined my entire adult faith- and yours, too.

More and more people (perhaps you are one of them?) speak of themselves as, “spiritual, but not religious”. The number of people who identify themselves as having “no religious affiliation” has more than doubled in the past decade, while the number of people who identify themselves as “Christian” has dropped dramatically. Many more people talk about believing in God, but don’t find church a meaningful way to connect with God. Some have left altogether because church even hinders their connection to God more than it helps.

So what is going on?  Is this a sign of a generation that is turning its back on God- or is it part of a movement of the Holy Spirit, calling people to a deeper and more profound connection with God?    That is what I want to explore in this series. It may change the way you experience God, see the church and live your faith.

It is a four-week series and it will address subjects like:

If you haven’t been to church in a while, I especially want to invite you to this series. I suspect that the reason you have found church less compelling has less to do with being “too busy” and more to do with some deep dissatisfaction with the church- and maybe with God.  I want to address those things.

If you have been attending and participating regularly, by all means come- and invite a friend who hasn’t been to church to come with you. If you are part of a LIFE Group, I will have discussion materials available for you to use that should spark some great and meaningful conversations.