Getting Old or Aging Well? 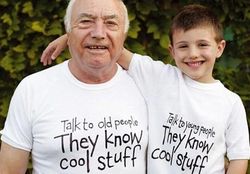 Here's a question: "What's the best part of getting older?  What's the worst? I'd love to get your thoughts this week. It's all part of our series this fall, "Growing Wise in the Seasons of Life."

We are using scenes from films to help highlight the issues of getting older- through all stages of life. The first week was "Big" and last week, Erik showed a scene from "Second Hand Lions". This week we'll see a scene from "The Best Exotic Marigold Hotel" and the issue is "aging".

What are the fears that are stirred up by getting older? What are the benefits? While you're thinking about your answers, here is a passage on "Old Age" from Frederick Buechner:

IT'S NOT, AS THE saying goes, for sissies. There are some lucky ones who little by little slow down to be sure but otherwise go on to the end pretty much as usual. For the majority, however, it's like living in a house that's in increasing need of repairs. The plumbing doesn't work right any more. There are bats in the attic. Cracked and dusty, the windows are hard to see through, and there's a lot of creaking and groaning in bad weather. The exterior could use a coat of paint. And so on. The odd thing is that the person living in the house may feel, humanly speaking, much as always. The eighty-year-old body can be in precarious shape yet the spirit within as full of beans as ever. If that leads senior citizens to think of all the things they'd still love to do but can't anymore, it only makes things worse. But it needn't work that way.

Second childhood commonly means something to steer clear of, but it can also mean something else. It can mean that if your spirit is still more or less intact, one of the benefits of being an old crock is that you can enjoy again something of what it's like being a young squirt.

Very young children and very old children also seem to be in touch with something that the rest of the pack has lost track of. There is something bright and still about them at their best, like the sun before breakfast. Both the old and the young get scared sometimes about what lies ahead of them, and with good reason, but you can't help feeling that whatever inner goldenness they're in touch with will see them through in the end.

from Whistling in the Dark