The Perils of Becoming "BIG" 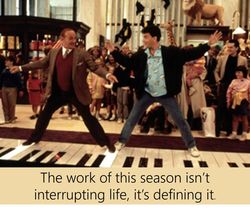 We started our annual "Moving Pictures" series on Sunday with a clip from the movie, "Big." The theme for this summer is "Growing Wise in the Seasons of Life", and we are using movies that talk about growing older.

There are seasons in life just as there are seasons in nature. As in nature, we don't control the seasons of life. All we can do is respond and tend to the work of each season. "Big" is a movie where someone desperately wanted to be in a different season of life- and then got a glimpse of what he would have to give up to stay there.

Do you know what season you are in?

There are seasons of waiting, healing, gathering and losing. Some are in seasons of loss, saying 'good-bye', saying 'hello' or having to say, "I'm sorry'." Some are in seasons of needing to learn new things and others are having to unlearn things that no longer work.  The seasons of life aren't always pleasant or what we would choose, but they are nonetheless the season we have been given. When we treat a particular season as a problem that needs to be solved so we can get back to "normal", we miss not just the work of that season, but the presence of God. Another quote we used reminds us that,

This season is not a problem to be solved,

it is the next chapter of your life

that is waiting to be written.

Jesus and the Seasons

Jesus knew something about seasons.  The second chapter of Luke 2 is all about the humanity of Christ. We sometimes get the notion that Jesus was only pretending to human. Sure, he was a first century Jew, but we suspect he probably could speak French, knew Calculus and would have been impossible to beat in Jeopardy (I'll take "Astrophysics for $500"). The idea that Jesus would ever fall, skin his knee, misspell a word or be limited by his time and culture just seems so wrong- which is to say...so human.

Jesus' humanity wasn't a trick. Luke 2 goes out of its way to describe how Divinity was conceived and born. At the right season, Jesus was presented at the Temple, learned to talk, walk and all things every other kid needed to learn. He learned the Law, and knew it well, not because it was automatically downloaded into his brain, but because he studied it. At the end of the chapter it is summarized by saying,

And Jesus grew in wisdom and in years, and in divine and human favor

Did you catch that? Jesus "grew". Jesus could have dropped out of the sky and ready to go from Day 1, but he didn't. He had to grow up and grow wise in all the seasons of his life. When Jesus was born, it wasn't God trying to just appear human, but embracing it. God wasn't condescending to our humanity with all its seasons and lessons, but redeeming it. Jesus did the work of each season. In so doing, he was ready for the work that was ahead. Why would we expect anything different for ourselves? 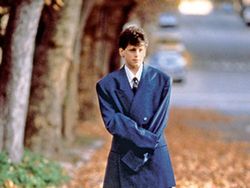 The Mask of "Enough"

Underneath the dissatisfaction with not being "Big enough" is a lot of humiliation and shame- not because of what we have done, but because of who we are.  Being "big enough" is just a sub-set of "I am not enough". I am not smart enough, rich enough, thin enough, popular enough, successful enough, competent enough, etc. The list never ends. It is too painful to bear, so we compensate. The main character (Josh) got to literally be 'bigger'. Most of us have to do the same with pretense, smoke and mirrors. Some of us are pretty good at it.

We put on the facade of people who have it together, always in control, secure, wise, savvy and not afraid. But its just a mask that we hide behind. Most of the time, we pull it off- and that's the problem.

The peril of "becoming big' is not just that we miss the season we are in, but we lose our true selves in the process. We are never known because all we have shown is the false self: the person we think we want to be or think we should be. We keep people at arms distance, afraid what they would think if they knew the 'real' person behind the mask.  We do the same with God.

The peril of 'becoming enough' is not that we want to be bigger, smarter, richer or more successful, its that we actually believe that those things will make us 'enough'.

We celebrated communion on Sunday. We were reminded that Jesus didn't invite his disciples to the table because they were "enough", but because they were loved. It was the people who thought they were "enough" (or could be, if they worked at it hard enough) that stayed away. It was the illusion of "enough' that kept them from God. Jesus didn't come for the masks we try to hide behind, but the people who are hiding behind them.

The Gifts of Imperfection 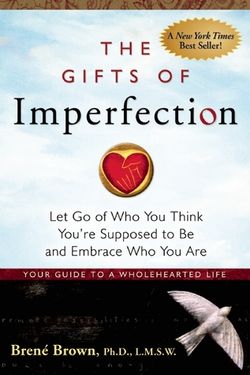 Our summer book club is reading Brene' Brown's The Gifts of Imperfection." Its a wonderful book that

covers some deep issues, including how we trade our true self for the mask of being 'enough'. It shrivels the soul and destroys relationships. It leaves us alone and afraid- especially when we are successful. When we dare courageous enough to let go of our fears and allow ourselves to be known for who we truly are, something amazing begins to happen.

Owning our story can be hard but not nearly as difficult as spending our lives running from it. Embracing our vulnerabilities is risky but nearly as dangerous as giving up on love and belonging and joy- the experiences that make us most vulnerable. Only when we are brave enough to explore the darkness will we discover the infinite power of our light.

As we come to the communion table, we to need to be reminded that Christ does not invite us here because we are 'enough', but because we are loved. You are loved. When you realize that, life changes. You are able to embrace the season you are in, they become part of the Good News, where we experience the presence and grace of God. You are not loved because you are "enough", you are simply loved. When that sinks in, then regardless of the season, it is  "enough".