It Starts With Prayer 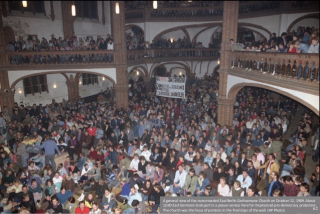 In October 1989, East Germany 'celebrated' its 40th birthday.  Russian president Mikhail Gorbachev was in Berlin and he seemed to signal a new era. He even went outside and greeted protesters personally. Any hope of a softening from the government was dashed, however, when state police arrested those same protestors that night. The Gethsemane Church in Berlin decided to open its doors for a prayer vigil. Every night after that, people gathered to light candles and pray for freedom. On November 9, the Berlin Wall came down.

I sat in the same church the other night.* A member of the congregation was arrested while in Turkey in July. Repeated attempts to get more information have been blocked and there seems to be little they can do. So they decided to hold prayer vigils again. Every night since July, the community is invited to stop what they are doing for 20-30 minutes, light a candle and say a prayer. They plan to meet for prayer until he is released. I don’t speak a word of German, but we all understood one another. I trust God was able to translate the prayers whether they were in English or German.

New Hope is starting a 24-hour Prayer Vigil from Friday (10/27) noon to noon on Saturday. The Prayer Vigil is meant to be a season of prayer to attune us to what God wants to do in and through our lives. Different stations will be set up for people to pray. The hope is for have people praying for an hour in the sanctuary for all 24 hours (Session and Deacons have already signed up for the toughest times.) Even if you haven’t signed up yet, I hope you’ll find some time to come down.

Continue reading "It Starts With Prayer" »

I'm Calling It a Pilgrimage

I’m in Berlin and I think I am on a pilgrimage.

I know that sounds a little pretentious, but I think it fits.

Pilgrimage: A journey associated with someone or something well known or respected. 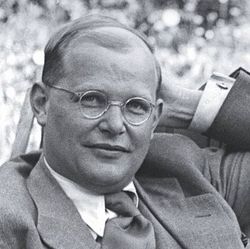 The reason I came to Berlin was the opportunity to explore the life, teachings, and influence of Dietrich Bonhoeffer. I’m here with my friend Rich Gantenbein and Mark Dodson. Mark has been a  student of Bonhoeffer his entire adult life and he is the one who suggested and organized this trip.

I was introduced to Dietrich Bonhoeffer in college. Someone gave me a copy of his book, The Cost of Discipleship saying something like, “You should read this. It will blow your mind.” It did.

It also started me on a path to learn more about this German theologian, pastor, hero, and martyr. Bonhoeffer was one of the most outspoken critics of Hitler and the German Christian movement in the 30’s. He became a double agent and sought to undermine the Nazis, even supporting the attempt to assassinate Hitler. It was for this that he was executed in April 1945.

Beyond his impressive life, I was even more struck by the thinking that fueled such a life. How did he think about God and faith in ways that compelled him to act so courageously, where others were content to simply- and tragically, just go along? His writings have challenged and stretched me. They have formed me.

So, here I am in Berlin. At first, I called this a Study Leave and technically, that is true.  But its more. As I was sitting on the plane, it occurred to me that I wasn’t coming just to learn more information. I am here to feed my soul and draw closer to someone who is still intriguing, challenging and forming me.

Pretentious or not, I think I am on a pilgrimage.